Logical and United: A Call to Repentance

Logical and United
An Essay and a Call to Repentance


I expect what follows to ruffle feathers, but I pray that if you know me then you know that I have thought, prayed, considered, and wrestled with what I am about to say thoroughly and deeply.

Every week, there is a hot-bottom, divisive issue that moves itself to center stage for both culture and the Church. In response, my feeds are filled with thoughts and more often than not those responses all share come common problems:

They are filled with faulty logic.
They are communicated poorly.
They display an idolization of party, country, and doctrinal position.

Friends, here’s the thing:
Christ was logical.
He was a good thinker and a good communicator.

When you engage in anything less, you aren’t reflecting Him.

When your posts, your shares, your comments, and your stories are fired off thoughtlessly and without a heart humbled and oriented towards the good of the entire Church, then you look nothing like Christ.

In fact, you look much more like the father of lies himself that you claim to be “radically and boldly fighting against’’. Not only do you reflect the enemy more than you reflect Christ when you are illogical and divisive, you also further his agenda instead of the agenda of the Kingdom of God.

I implore the Church to realize that the ends do not, in fact, justify faulty means.
Even if you’re “right”, you have no right to be illogical and to lack compassion.

Just because we believe that we are standing upon Truth doesn’t mean we are off the hook for being logical thinkers, debating respectfully and effectively, and communicating well.

In fact, we have more of a responsibility to those things.
We’re supposed to be different.

If you want to be truly “set apart” from this world, start with being radically logical.

When you have Truth to share, sharing it wrapped in illogical arguments is not an act of “fighting the good fight”. It isn’t okay to be illogical simply because you feel strongly about what you’re saying.

Christ’s great commission wasn’t to be a phenomenal keyboard warrior.
You’re not winning any medals for responding the fastest and coming down on the “right” side of every issue by parroting the loudest voice of social media.

Stop it.
For the actual and literal love of God Himself and the Church,
please stop it.

Let’s start here:
What Truth are you standing on?
Is it the gospel?

Or is it secondary to that?

Have you elevated your secondary doctrinal positions above the gospel of Christ?
Have you allowed their importance (because they are, indeed, important) to be clouded by the importance of being right and being “bold” (loud isn’t the same thing as bold, fyi)
and being the most conservative conservative that ever conservatived?

If the answer to any of that is “no”, then you have failed.
Strong words? Sure.

I hope they’re at least half as strong as the power of countless loud and obnoxious and illogical voices on social media engaging in meme wars and tearing apart their siblings in Christ in the name of being right.

Because those voices are powerful.
They are full of power to make the enemy roar with laughter.


As he watches us rip each other to shreds over things less than the gospel,
he rubs his hands in delight.
He dances in glee.
He sits back and relaxes because he doesn’t have to lift a finger to tear the Church apart….

We’re doing it ourselves.

We must return to an ability to know that the gospel is primary and that most other things are secondary or tertiary (if you don’t know what those terms mean, don’t share another thing related to theology or social issues on social media until you do- it’s your job to know.)

Once we’ve done that, we will then need to return to a biblical understanding of unity.

Unity isn’t agreement.
Unity in the Church isn’t everyone agreeing about every hot topic.
That, instead, is an idol of our own making.

Agreement on every secondary issue is indicative of a cult, not the Church.

Not the beautifully diverse and thoughtful and intelligent and wise and biblically literate
Bride of Christ that we are supposed to be.

Unity is in Christ alone.
It is in the gospel.

And when we actually understand that, we can fight for it.
We can fight for it instead of sharing our memes parroting positions on secondary issues that we
haven’t thoroughly wrestled through in the name of “getting everyone to agree”.

If we have to agree to get along, then we need to stop calling ourselves the Church,
because we are so poorly representing Christ that it makes me physically ill.

A lack of true unity is a SIN.
Walking in unity in Christ alone is a direct command.
And, we aren’t obeying it.

We are in direct disobedience to Christ, and it isn’t the fault of “liberals” or your “enemy” on whatever issue you’ve made your idol. If you fight poorly or lazily, then the fault is with you.

If your political party, your opinion about a social issue, or your doctrinal position matters more to you than your brother or sister in Christ, then you are committing a far more egregious sin than the “wokeness” that you think your “opponent” is wrapped up in.

Take the massive beam out of your own eye before you share about
the speck in someone else’s on social media.

It isn’t a “speck” because the issues don’t matter.
They matter.
It all matters.

It's a speck in their eye because it pales in comparison to the pillar of pride in your own.

The good fight isn’t to burn everything down with the flames of an argument that is
far more fire than it is wood.

The good fight isn’t to make liberals conservative or to make your Baptist friend a Presbyterian or to bring people to your “side” of any racial, social, practical, or theological issue.

The good fight is to share the gospel with the lost and
to be united in that gospel with EVERY one of your brothers and sisters in Christ.

And, you’ll likely find that you were wrong just as often as they were
about everything lesser than that saving faith.

In the meantime, as temporary citizens in this land that isn’t our home nor our hope,
the world is watching as we tear each other to pieces.

The world is watching and the enemy is celebrating.

Repent, Church.
Turn away from the altar of your party and your position and return to your first Love.

Apologize to those you’ve been unkind to.

Stop sharing unless you’re being logical and you’re communicating like Christ did.

Stop moving your fingers faster than you move your heart and your mind.

Stop elevating your opinions, and even your well-thought doctrinal positions above the gospel.

Stop tearing apart your siblings in Christ and using His name to do so.

Stop talking more than you listen.

Stop ranting more than you think.

Stop trying to be the best and loudest keyboard warrior….

If you want to truly be set apart….
Be radically logical.
Be radically good at nuance and communication and thought and quality debate.

Shut your mouth and use your brain.
Now, THAT will be radical. 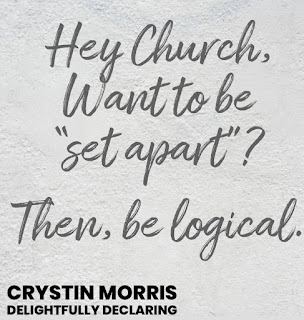 My Friend, Charlotte: Who and What Am I Talking About?