You're Supposed to be Exhausted 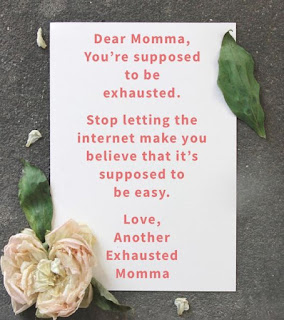 For mothers, the internet has become a place where the mom who has somehow made the daily tasks of motherhood seamless and painless is both the hero being worshipped and also the villain being envied.
This is a tragedy for two reasons.
1. She doesn’t exist. Motherhood isn’t painless and it isn’t seamless. Ever. She’s a lie.
2. Motherhood isn’t supposed to be painless and seamless. Motherhood is a laying down of one’s life for the life of others.

The internet makes mothers believe that if daily motherhood is difficult and utterly exhausting then it’s obviously being done poorly.
Mothers fall for this lie because the desire of the flesh is for ease and comfort.

The flesh will always want to self-preserve. It’s this desire for preservation that motivates us to be resentful towards the work we do and the people that we do it for. And, from this stems the idea that we’re simply working too hard (especially since no one recognizes us for the work anyway) and that we’re in need of a better system, a new outlook, a bright and shiny new planner, or whatever the week’s motherhood mantra on social media is.

If we can just situate things differently, it’ll be easier and we will “have more time for ourselves”. Then we will likely use this time scrolling the same social media that fed us this lie and we will soon see that we’ve once again been left at the starting block while everyone else takes off with yet another new idea or system or magical formula for easy and comfortable motherhood.

Stop the train and get off, friends.

The posture of the flesh is “how can I self-preserve and maintain the quality of my life?”. But, the posture of the Christian should be death to oneself and sacrifice of ones desires. This is an unpopular thing to say, both in the world and sadly also in the church, but it’s the truth. By telling mothers that they shouldn’t think of themselves last we’ve created a false narrative and an alternate reality for Christian mothers where they can demand to be appreciated and where any service of others should be rewarded with a girls night or a glass of wine and a manicure.

Like it or not, Scripture tells us to think of ourselves last.
And, if we will stop ranting about how we’re “not doormats” and “deserve to be appreciated” for long enough to see what’s true, we will remember that joy and peace aren’t in the affirmations of others or in others serving us. The Christian’s joy comes from pouring out of oneself for others.

Loving God results in a love for neighbor that demands our all and expects nothing in return.

And, our children are our neighbors.

Why is it that we think we’re equipped for ministry outside of our homes when we buck against the ministry we’re called to within our homes? We can’t love others well enough to lay down our lives joyfully for them if our children aren’t some of those “others” we’re willing to die to ourselves for.

This laying down of our lives must be done in joy and with open hands and willing hearts. Not with nagging lips and fingers from which flow posts of resentment and cries for solidarity against the “martyrdom” of motherhood.

Mothers aren’t martyrs.
Christian mothers are servants of Christ whose very existence is for His glory.
A motherhood that glorifies God is one in which sacrifice is joyful.

We can’t call ourselves qualified for leadership and ministry anywhere else if we can’t even wash a sink full of dishes with a grateful and contented heart.
If we fold clothes and clean sticky floors and cook meals in resentment, we are not ministers at all.

Ministers don’t begrudgingly and resentfully serve and then
demand to be appreciated and compensated for it.

Ministers spend far more time actually doing their work than they do searching every corner of the internet for a better system for making their work “easier” and “more comfortable”.

You’re supposed to be exhausted, Momma.
Motherhood isn’t everything you are, and it isn’t the only place you’re called to serve and to lay down your life. You’re also called to friendship, marriage, ministry, fellowship with and service of the saints, evangelism, and an assortment of other things. And you’re called to do them all well, reflecting Christ.
But, motherhood is no doubt the most demanding of those callings in this season, and the place where you’re most tempted to cling to your own life instead of willingly offering it up.

Can I encourage you with some good news?
You aren’t enough for all of those callings, or any of them, and especially not for motherhood. You don’t have enough to give and your strength doesn’t measure up.
But, the grace of Christ is sufficient for it all, and God has equipped you
for every good work that He designed for you before the foundation of the world.

He provides all that you need, and in offering up of one’s life is found the joy and peace that comes only from turning away from the temptation to demand appreciation instead.

One of the things that He provides is your energy and your waking hours.
And, He expects you to expend every bit of it in service of Him. That is what you’re living for.

He equips us with all that we need to build His kingdom in the ways in which He’s commissioned us to, and we’ve no right to take those provisions and attempt to hoard them away for our own pleasure.

Your energy isn’t a luxury. It’s a tool.
It isn’t for you. It’s for others.

The Christian life is one of death to self and joyful service of others, and no matter how much messaging champions an outlook of self-preservation,
you were never intended to preserve yourself or to serve yourself.

Release your death grip upon your own desires and open your palms.
Let joyful service flow from your fingers, your lips, your heart and your life.
Die to yourself, and truly live.

Use the energy God provides each day in service of Him and those He’s given you.
That’s what you’re supposed to be doing.
You’re SUPPOSED to be exhausted.
Your head is supposed to hit the pillow each night
not having hoarded up more for yourself but having given it all
to those around you as an act of worship for your King.

It’s not supposed to be easy.
The truly incredible thing about giving it all is that when you do, God will replenish those provisions.

You’ll arise in new mercies and fully equipped to give it all again.
That’s the Christian life.

You’re not a hero for cooking 895,678 meals this week.
You’re simply a servant of Christ.
And, to serve Christ means to serve others.
Joyfully. Sacrificially. Willingly. Wholly.

So, ignore the lies and turn to the Truth and stop searching for a secret to ease.
Instead, take joy in the hard.
Because, that’s where joy is to be found.

**Note:
Please know that I am not advocating for not resting or neglecting the stewardship of our health and bodies, which are also tools from God to be used for His glory.
Christ set an example of Sabbath rest, and then He Himself became our perfect Sabbath. It is in Him that we find our rest, but we also can learn from His example of seeking solitude to pray and rest.
We absolutely need physical rest and good mental health in order to do the work that God has given us to do. This is good stewardship and it is obedience.
I speak often about SCHOLE, and I am an advocate of *true* rest.

I do think it's important that we define rest accurately; scrolling social media and binge watching tv are not rest. That doesn't mean that those things are wrong, but they aren't restful. Rest invigorates the mind, rather than dulling it.

And, we DO need rest.

We need to define rest accurately, seek rest appropriately, and use rest as the tool that it is in order to be equipped and ready to do the work that God calls us to.

Keep on keeping on, Momma.
Run the race with patience.
Press on towards the prize.
When Christ returns, let Him find you exhausted and joyful.
Be found being faithful.
Colossians 3:23-24
By Crystin Morris

My Friend, Charlotte: Who and What Am I Talking About?